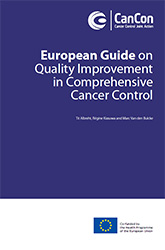 A new Guide published online today gives recommendations on how to boost cancer control in Europe. The Guide is the result of a three-year effort by top experts in 25 countries and 126 partner organisations.

They have been working together in an EU co-funded joint action, known as Cancon (officially titled European Guide on Quality Improvement in Comprehensive Cancer Control Guide).

- The quality improvement of cancer care is at the heart of the Cancon Guide. It will be reached by focusing on the patient’s experience, care and health services organization, delivery and accessibility, says Tit Albreht, the coordinator of Cancon joint action.

The Guide’s authors stress that besides saving money and time, effective cancer control increases quality of life. Currently some 2.6 million people in Europe are diagnosed with cancer annually. But more and more cancer patients are overcoming the disease. Therefore greater attention needs to be given to access to care, early diagnosis, rehabilitation, and survivorship.

- The good practice recommendations in the Guide strive to improve the national situations. The Guide is meant for decision-makers and cancer care professionals in Europe, explains Albreht.

The Guide includes a detailed survivorship care plan and evidence-based recommendations on cancer screening programmes for the member states of the European Union. This is the main outcome of the joint action.

The Guide will be officially launched at the Cancon Final conference, 14-15 February in Malta. The recommendations will be presented and discussed at the conference. This high-level conference includes a panel of European Health Ministers, and discussion on challenges in cancer policy at EU level.

- The implementation of these recommendations is the next step. We do not want the Guide to be just another book on the shelf, says Albreht.

Cancon is a joint action initiative, co-funded by participating institutes, organisations, universities and health care units, and the European Union. It started in 2014 and will end on 23 February 2017. Besides Guide, the joint action will publish five policy papers on cancer.