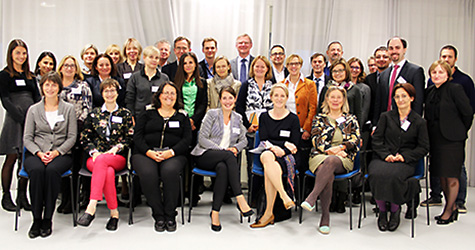 Participants of Cancon Screening meeting in Oslo on 8 and 9 October, 2015.

There are still 30 000 European women who die of cervical cancer each year, so it’s clear that the screening programmes are not good enough in all the countries. The programmes were discussed in the Cancon WP 9 working group meeting on cervical cancer screening in Oslo.

At the moment, there are 20 countries with a population based programme. The interval of screening is in most programmes between 1-5 years.

The screening is free of charge in most countries. In two countries you have to have a health insurance and in four there is a co-payment needed.

In 16 countries there is a mass screening registry to follow up the screenings. Of all the samples, between 1% to 80% are taken outside of the screening programme.

There are countries with long traditions in screening. They have managed to reduce the number of cancer cases already significantly.

On the other hand, there are still countries in EU without a proper cervical cancer screening programme. Or even if there is a programme, it hasn’t managed to diminish the number of cancer cases.

Programme must be customized

A screening programme cannot be started very quickly from a scratch, and to make it run properly takes at least ten years. Even if there is a lot of useful experience one can use from the countries that have had a screening programme for more than thirty years, one cannot adapt a programme from another country.

A programme have to be always fitted to a particular country and tested, that it works and really prevents cancer deaths. The health care systems are different, the populations are different.

The financial situation has to be taken into account as well. You don’t necessarily have to use newest tests available, the results can be very good even with the older, much cheaper test.