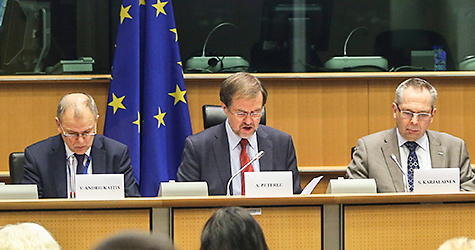 - My vision is to have a national all-party cancer group in each member state, said MAC President and MEP Alojz Peterle. Peterle spoke at the anniversary event of MEPs against Cancer (MAC). The European Parliament group celebrated 10 years of collaboration on cancer on 9 of December in Brussels.

Founded in 2005 by MAC President and MEP Alojz Peterle, the group aims to facilitate all-party collaboration on cancer policy, with the aim of reducing the cancer burden in Europe.

Mr Peterle hopes to achieve this goal by collaborating with ‘MAC Ambassadors’, a representative MEP from each member state who would facilitate the creation of a MAC group in their national parliament. This would also help to enhance the cooperation between EU and national health policies and strive to reduce inequalities in Europe.

- Our goals are – and will remain - to prevent cancer where we can, and to improve the prospects of cancer patients through early diagnosis as well as appropriate information and care. The MEPs Against Cancer group will continue to be a reference partner in our common efforts and actions against cancer in the European Union.

As President of the Association of European Cancer Leagues, Dr Sakari Karjalainen from the Cancer Society of Finland noted the importance of cross-sectoral collaboration between policy makers and civil society.

ECL is provides the Secretariat for the MAC group, and is a partner in the European Commission Joint Action for Comprehensive Cancer Control (CanCon). Being able to work with such supportive policy makers and allies ensures that cancer remains high on the political agenda, which ultimately benefits citizens and cancer patients themselves.

The MAC group has three strategic aims for its work on cancer policy in the current parliamentary legislature: