Joint action to control cancer – why and how? 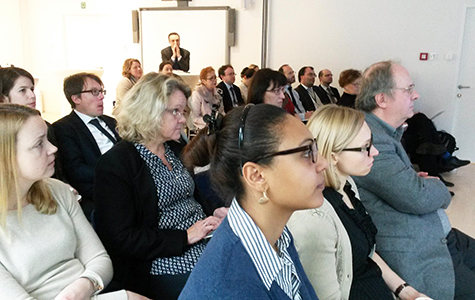 The participants of the breakfast seminar on Cancon for the EU health attachés on 23 of February.

A breakfast meeting was organised to discuss the European Joint Action on Comprehensive Cancer Control Tuesday 23 February 2016 at the Permanent Representation of Finland for EU in Brussels. Particular focus was put on the project objectives, process and working method and outcomes.

There were almost twenty Health Attachés from EU countries, Norway and Switzerland, and also people from patient organisations present.

WP leaders and representatives Sakari Karjalainen, Giovanni Nicoletti, Ahti Anttila and Regine Kiasuwa Mbengi gave updates on what is happening in different work packages at the moment.  All the packages will contribute to the final document, the Guide. The core messages will be expressed also in five policy papers .

MEP Anneli Jäätteenmäki from MEPS against cancer said that as a former cancer patient she thinks it’s very important that patients get not only quick diagnosis and treatment but also information on the disease and patient organisations.

- Taking care of the patients after their treatment, when they are cancer survivors, is also very important, she highligted.

She said cancer experts should resolve how to communicate recommendations to EU member states and how to apply in different populations with different stance toward medical issues. There should be EU‐wide co‐operation and concentration of assessment and treatment of for example rare conditions.

We heard also about patient’s perspective of cancer care and survivorship. Isabelle Lebrocquy from Netherlands is working to get cancer patients keep their jobs and to find new jobs with the society she has created, Opuce.

She herself lost her job during her cancer treatment. She called for action: now it’s time to act or time to go home.