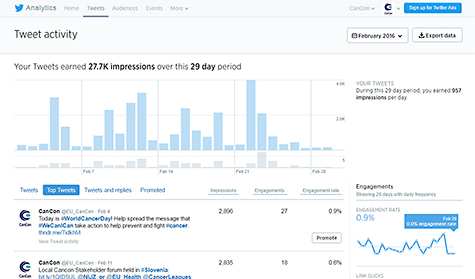 The amount of followers has grown steadily compared with the amounts six months ago: there were 310 followers in November and 475 in the end of April. At the moment Cancon Twitter has 480 followers.

This can be seen from the analysis carried out by the Cancon Dissemination team.

The growth was biggest in February, when the account received 51 new followers. This may be due to short news items released on Cancon policy papers on the webpages in February. According to webpage analysis the news have attracted many visitors.

Tweet impressions measure number of times users are served a tweet in timeline, search results, or from the profile. When the tweet impressions are examined, the total amount of impressions is quite high with the average of almost 16 000 impressions per month.

The amount of tweet impressions for Cancon have grown steadily during last six months. When the impressions of a single tweet is examined, the highest amount per tweet is approx. 2 300.

When the engagement is examined more carefully, you can see that Cancon tweets are rather popular. They are retweeted and liked often, and if a link is included other users click it. Therefore the content of the tweets seems to be interesting for Twitter users.